Who Are Systems Administrators? A Job Outlook and Salary Profile 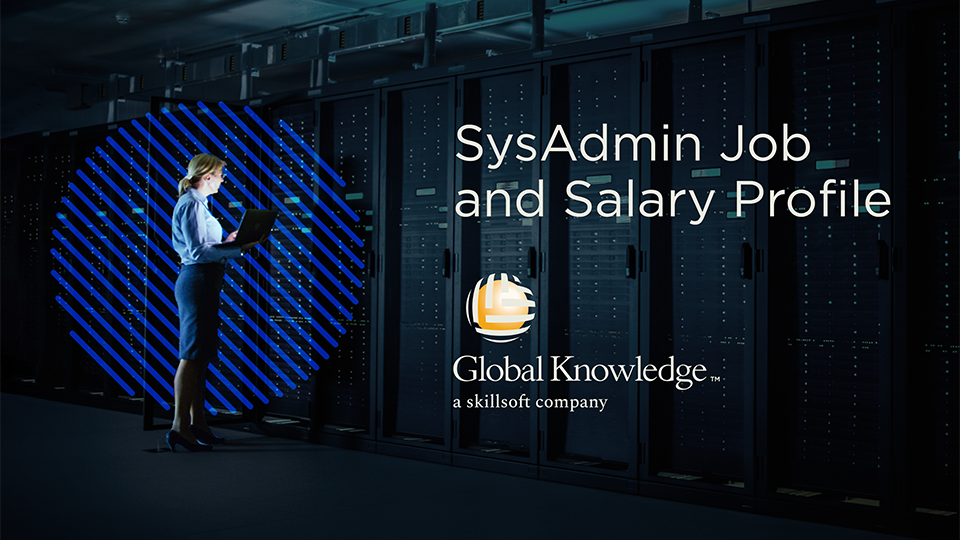 Systems Administrators, or SysAdmins for short, are most often frontline IT staff who are problem-solvers, (metaphorical) fire extinguish-ers, and, simply, doers.

SysAdmins do a little bit of everything. They keep the organization running. From network availability to password resets, collaboration with developers to documentation updates, SysAdmins cover the gamut as IT generalists.

With this in mind, the roles and responsibilities of SysAdmins often fluctuate depending on the organization’s needs or type, industry, team size, and several other factors.

From Global Knowledge’s IT Skills and Salary Report survey data, SysAdmins identified themselves under several disciplines, including cloud computing, security, data and analytics, among others. Most responses came from those who identified their roles under these functions:

To better understand the hard-working professionals who occupy these roles, we looked at some of the data collected to see what comes with the job, including:

This report provides a glimpse into the world of a SysAdmin. Naturally, there is nuance to every job role, with many wearing several different (or more) hats. For those seeking or building a career in IT, a SysAdmin role is a common starting point. With this report, we hope you can better understand what to expect and how to plan for your future.

As mentioned earlier, the duties of a SysAdmin tend to change. Sometimes, they’re more narrowly focused, whereas some are more broadly focused in their responsibilities.

Systems administrators working in a Service Desk and IT Support function break down this way:

For those with a focus on Infrastructure, Networking and Telecommunications, the ratio between male and female respondents was greater. The vast majority (92%) identified as male, with the difference identifying as female.

How Many Years of Experience Do Systems Administrators Have?

For more than a decade, Global Knowledge has surveyed thousands of IT professionals who report on their careers, experiences and far more.

Of those who participated in the survey, the following data derives from those who identified themselves as systems administrators in either a Service Desk and IT Support role or an Infrastructure, Networking and Telecommunications role.

As mentioned, SysAdmins’ jobs vary based on several factors. For this reason, we separate the data and reporting by these two job functions to help provide a fuller profile and understanding of how specialization can affect one’s career in IT.

Why does this matter?

While not always the case, those with more responsibility, experience, skill and training tend to make more than those who have less, which is reflected in the salaries of the systems administrators under each of these functions.

How Much Money Do Systems Administrators Make?

It’s worth reiterating that while systems administrators share the same job title, the responsibilities — and by extension, salaries — vary depending on their focus or specialty.
Service desk roles tend to have lower salaries than those in networking, according to our findings, but variables like those mentioned before may factor into the differences.

Depending on how much experience, knowledge and skill systems administrators have, their salary increases of decreases. As you might’ve guessed, those with more career experience tend to have higher salaries than those with less.

In the tables below, we provide what SysAdmins reported to us via the annual IT Skills and Salary survey.

The average salaries with an asterisk (*) had very low respondent counts. As a result, these salaries may increase or decrease with additional salary data.

There are some situations in which some may report lower salaries, even though they have equal or more experience than their peers, including the market rates at the time of hire or where in the U.S. the professional works. For this report, we don’t distinguish the data based on a professional’s location (E.g.,. California vs. South Dakota).

What Certifications Do Systems Administrators Have?

Certification can elevate an IT professionals career in several way — from higher salaries to new job roles and beyond. Largely, SysAdmins recognize the importance of IT certifications based on our findings.

The most common certifications for SysAdmins working service desk roles:

The most common certifications for SysAdmins in a network-focused role include:

Do Systems Administrators Manage a Team?

By and large, systems administrators do not have management responsibility. Looking at data sets for those in service desk, networking or others show the majority do not manage a team.

For service desk employees, three-quarters do not have management responsibility. The number is even higher for those in networking at 87%.

However, of those who do manage a team in a service desk-focused role, the majority of survey respondents reported having more than 16 years of professional experience.

Networking-focused professionals tend to start managing teams after six years of professional experience, according to our data. Three-quarters of networking SysAdmins respondents who manage a team have six or more years of experience.

For those who do not manage a team, the data shows those under both job functions are still in what could be considered the first half of their careers — namely having less than 15 years of experience.

Do Systems Administrators Have a Growth Mindset? Yes, they do.

Overall, respondents to the IT Skills and Salary Report survey tend to enjoy what they do. However, a portion yearn for more.

In both roles, our data shows 47% of systems administrators reported they are somewhat or extremely likely to look for another job in the next 12 months.

Of those who did change employers, the three main driverswere:

How to Become a Successful SysAdmin

Pursuing a career in IT can lead to many exciting, fulfilling, and challenging (in a good way) opportunities. It’s often that becoming a systems administrator is one of the first steps on the journey to a long career in IT.

Whether you’re graduating from high school, a technical college, four-year university, or thinking about changing careers, it’s important to consider what a successful systems administrator must know.

We compiled a list of the top 10 courses for SysAdmins. According to our research, these courses are among the most sought-after.