Cloud, DevOps and IoT Trends to Watch for in 2017

Where are Cloud, DevOps and IoT heading? 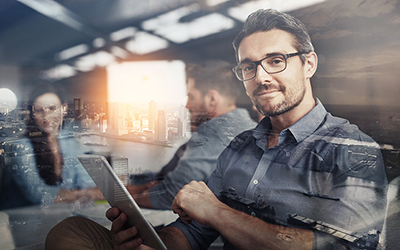 Hold on to your hats. If you thought this last year was a wild ride when it came to the cloud, DevOps and the Internet of Things (IoT), then 2017 will only be faster and crazier.

Trends like artificial intelligence and machine learning are taking off thanks to the massive amounts of data now being collected by internet-connected products and their companies. As a result, innovations are coming at an increasing pace according to Global Senior Portfolio Director Pete Vorenkamp, who oversees IoT, DevOps and cloud computing for Global Knowledge, a worldwide leader of IT training.

Vorenkamp, a veteran of the technical consulting and cloud space with tours at Hewlett-Packard (now HP) and Rackspace, foresees some major trends in the coming year. Here’s a look at his list of what businesses should be keeping an eye out for in regards to cloud computing, DevOps, and IoT in 2017.

The debate over whether or not to use the cloud is over. Leading businesses and enterprises are on board in a big way.

“It’s more of a question of ‘when’ not ‘if,’” Vorenkamp said. “From a cost and agility perspective, it’s the right way to go for many businesses. The challenge businesses are still facing is: ‘We have a budget for cloud, but we don’t know what we’re going to do it yet.’”

This is where consulting and system integrators can help with the right strategy and digital transformation road mapping.

The pace of innovation is escalating

With the acceleration of cloud products and services being launched, it’s unlikely that businesses will have a lot of time to figure out how to get the most from the cloud in 2017.

“They announced so many new services the audience was like ‘holy crap.’ We can’t keep up with this pace of innovation, but we love it,” Vorenkamp said.

Amazon said they have no plans to slow down either. “And that’s part of the issue. At this pace of change, the ability to be an expert in any one area is a thing of the past,” he said. “If you are in the tech field, don’t fear the change. What’s more important is your ability to understand what’s out there and how to best leverage both technical and business skills to succeed.”

There is already a shortage of cloud talent and this gap is growing rapidly. Over 70 percent of the IT decision-makers indicated they are having difficulty filling positions in IT security, IT architecture, cloud computing, network engineering and .NET development, according to Global Knowledge 2016 IT Skills and Salary Report.

Companies can’t buy their way out of the skills shortage either. They can’t hire enough people, so they are turning to retraining the people they have on the inside, Vorenkamp said.

Need for systems that can speak to each other

The hottest thing right now for cloud is interoperability. According to a study by RightScale, a leader in cloud management and consulting, the average cloud customer operates on six different cloud environments.

Companies are asking for more interoperability capabilities in order to run workloads such as Linux on Microsoft Azure or running Citrix with Nutanix.

“We are seeing more multi-vendor complex environment requirements,” Vorenkamp said. “And that can get complicated.”

In many cases, you need added IT expertise to operate in a cloud environment with mixed workloads. The good news is that with most cloud platforms, these new capabilities are possible and further extend a client’s value to its customers.

In 2017, businesses will be looking to extract more value from the cloud. They want cost reductions and new revenue streams to happen faster, Vorenkamp said. This means taking advantage of the cloud’s elastic capabilities.
“With the cloud you can auto scale computing capacity from 1 to 1,000 in the server environment,” he said.

In the old IT model, if demand were to change beyond your fixed infrastructure, you were in trouble. Cloud providers like Amazon offer services like auto scaling, which in turn allows business the elastic ability to spin up more capacity to handle dynamic loads in relative real-time to handle unplanned demand; thus, site crashes are averted. That was simply not possible in traditional IT environments, he said.

The cloud will take over business functions

Platform as a Service (Paas) is where developers are creating value so there is a lot of activity by technology companies focused on new tools and processes to allow clients to do their work faster and with more capability.

Just look at companies like IBM who have placed more focus in Bluemix, which is where all of the development, activity and value is being realized such as IBM Watson, he said.

In 2017, there will be also more of an emphasis on automation, IoT and business process as a service (BPaaS) to unleash more new value and disruption in the market, according to Vorenkamp. As we move to expand cloud service models, we are going to see cloud extend its reach into client process functions like finance or human resources for example, Vorenkamp said.

With the speed of innovation in the cloud, many companies are struggling to keep up with software development and deployment. The old models of silos and separate systems aren’t working anymore, and it’s caused the creation and rise of DevOps movement, Vorenkamp said.

Today’s customer wants that new app or upgrade or bug fix now, so weeks to get that delivered is just not acceptable.

“That’s what happened in the old model. Different team, different tool, different processes,” he said. “Companies are saying, ‘We have to innovate and get our projects out to market faster…How do we get all the players to collaborate and be more efficient?’ Businesses are clamoring to not only be more agile but to also ensure that new agility extends all the way out to the customer and back again for continuous rapid improvement.”

Expect to see greater horizontal value for DevOps tools on the market. Major players like Puppet, Ansible, Chef and Docker are expanding their capabilities from development to operations. These tools will not only help with employees’ specific technical functions but will also operate interdepartmentally.

There is a cultural shift that first has to happen in order for DevOps be successful. How are businesses going to prioritize and spend the time and effort to manage the cultural change? You’ll see a continued emphasis on T-skills and not just a narrow focus on technical skills alone.

“IT resources in a DevOps environment will have to know more about the business and be more collaborative, too,” Vorenkamp said. “You have to play with others, literally. That’s the challenge. That’s not traditionally the skill set you see in IT; we are talking about a totally new muscle memory here.”

“The biggest win in IoT is going to be unlocking business value that simply wasn’t possible before,” Vorenkamp said. “New revenue streams, new products and services are going to be created.”

And it won’t likely be consumer IoT leading the charge. Industrial IoT (IIoT) is already gaining early traction to reap the most benefits, especially in industries like agriculture, manufacturing and healthcare.

New revenue streams will be found

“IoT is the next monster wave,” Vorenkamp said. “IoT will infiltrate every aspect of our lives for good and for bad. I’m most excited about the potential of where IoT is going.”

Think electric generators that will monitor themselves and feed information back to manufacturers for predictive maintenance.

“They can replace a machine if needed before it will ever fail. In turn, manufacturers can improve future designs based on the data collected,” Vorenkamp said.

“(IoT) will unlock new revenue streams that were previously unreachable by businesses before,” he said. “You are no longer fighting for the same piece of the pie; there are bigger pies.”

Security will be huge

“Early in the IoT space, we’ve seen some denial when it comes to security. Initially, it was all about enabling IoT. But security has been lagging in focus,” Vorenkamp said. “Businesses have to focus on more security at the edge; those are the devices that are at the edge sensing the real world. Think of the risks associated with billions of devices that could be hacked. You will have the mother of all bots to attack the internet.”

On Oct. 21, hackers launched one of the largest distributed denial-of-service (DDoS) attacks against Internet Performance Management company Dyn, a provider that supports many major web properties such as Twitter, Reddit, Spotify, Airbnb, Netflix and Amazon’s Web Services, according to a recent blog article by cybersecurity and risk expert Bob Withers.

The hack isn’t likely to be a one-time thing. At this year’s DEF CON, hackers found 47 new vulnerabilities, in 23 devices for more than a dozen manufacturers according to a CSO article. And the problem is likely to get worse.

There will be about 26.3 billion devices by 2020 according to Cisco, and other projections are much higher, Vorenkamp said.

“It’s going to be like nothing we’ve seen before as far as the data that’s going to be available for interpretation and new value extraction. AI doesn’t get better without the data. All the big players know it, and that’s why they are headed in that direction.”

The keys to moving forward are adaptability and learning to unlock the value in all this new data.
“Massive amounts of data has to be analyzed and used in a way to extract business value,” he said. “It has to extend to real business value or why else are we doing it?”

Want to know more about DevOps, cloud or IoT? Check out related resources from Global Knowledge.