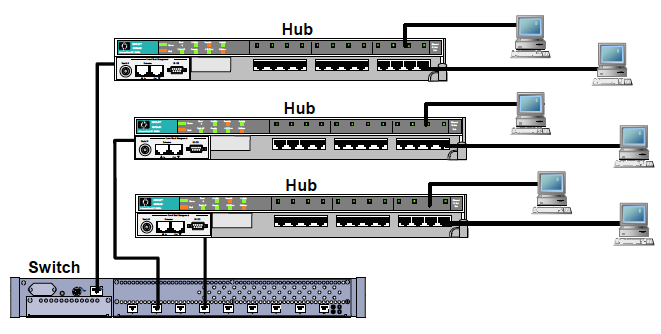 What is a Hub?

Hubs provide a dedicated physical connection for every device, which helps reduce the possibility that a failure of one computer will cause all computers to lose connectivity. However, because a hub is still a shared bandwidth device, connectivity is limited to half-duplex. Collisions remain an issue as well, so hubs do not help improve the performance of the network.

Hubs are essentially multiport repeaters. They ignore the content of an Ethernet frame and simply resend every frame they receive out of every interface on the hub. The challenge is that the Ethernet frames will show up at every device attached to a hub, instead of just the intended destination (a security gap), and inbound frames often collide with outbound frames (a performance issue).

What is a Bridge?

In the physical world, a bridge connects roads on separate sides of a river or railroad tracks. In the technical world, bridges connect two physical network segments. Each network bridge keeps track of the MAC addresses on the network attached to each of its interfaces. When network traffic arrives at the bridge and its target address is local to that side of the bridge, the bridge filters that Ethernet frame, so it stays on the local side of the bridge only.

If the bridge is unable to find the target address on the side that received the traffic, it forwards the frame across the bridge, hoping the destination will be on the other network segment. At times, there are multiple bridges to cross to get to the destination system. 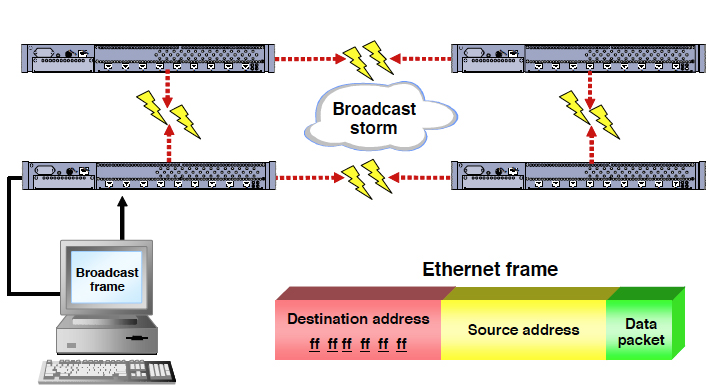 The big challenge is that broadcast and multicast traffic must be forwarded across each bridge, so every device has an opportunity to read those messages. If the network manager builds redundant circuits, it often results in a flood of broadcast or multicast traffic, preventing unicast traffic flow.

What is a Switch?

Switches play a vital role in moving data from one device to another. Specifically, switches greatly improve network performance compared to hubs, by providing dedicated bandwidth to each end device, supporting full-duplex connectivity, utilizing the MAC address table to make forwarding decisions, and utilizing ASICs and CAM tables to increase the rate at which frames can be processed.

Switches keep track of the MAC addresses in each interface so they can rapidly send the traffic only to the frame's destination.

Here are some of the benefits of using switches:

Learn more about how switches work.

Related courses to develop these skills