What is Twisted Pair and Does It Work?

“Twisted Pair” is another way to identify a network cabling solution that’s also called Unshielded Twisted Pair (UTP) and was invented by Alexander Graham Bell in 1881. Indoor business telephone applications use them in 25-pair bundles. In homes, they were down to four wires, but in networking we use them in 8-wire cables.

By twisting the pairs at different rates (twists per foot), cable manufacturers can reduce the electromagnetic pulses coming from the cable while improving the cable’s ability to reject common electronic noise from the environment.

Each pair carrying data has one wire that is the positive lead, while the other acts as the negative lead. Comparing the data received on both wires, the receiver eliminates common-mode noise picked up along the cable and gets an accurate value for the data.

When we use twisted pair cabling for networking, it follows the standards set by the Electronics Industry Alliance and the Telecommunications Industry Association (EIA/TIA). Since EIA stopped operations in 2011, the standards now fall under TIA. The latest standard is TIA-568-C. 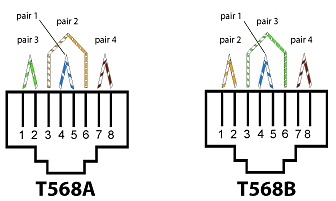 There are two standard ways of connecting ends to the cables: T568A and T568B. As you can see, they are the same except that pairs 2 and 3 are swapped. TIA recommends T568A for new installations though T568B is more compatible with previous cabling solutions.

The physical connectors are 8P8C (8–position, 8-conductor) though many people refer to them as RJ45. RJ45 is a keyed, single data line connector that’s rarely used. UTP is capable of carrying two data lines at less than 1 billion bits per second each.

If the cable connects different kinds of equipment (i.e. from your computer to the switch built into your home router), you will want to use a straight-through cable with the exact same wire or pin layout on both ends.  If you have a large multi-floor house or building to wire and you need to connect a switch on one floor to the main switch built into your home router (connecting the same kind of equipment at both ends), a crossover cable will be the right cable. 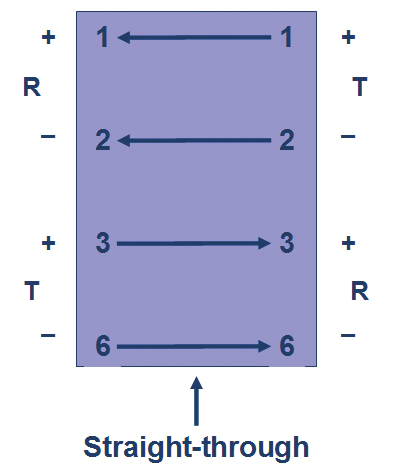 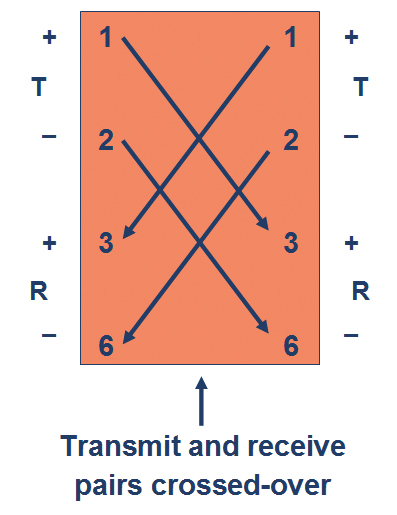 Though most people think of data over network cables, UTP can carry data, voice, and video equally well. At data speeds below 1 Gbps, the unused wires also have the ability to carry electricity to power remotely mounted equipment.

Related Posts
What Do All These Bits and Bytes Do?
Layers and Numbers
Gigabit Wi-Fi Summed Up