The shun Command on the PIX/ASA

One command that had a fairly long history first with the PIX Firewall and now the ASA is the shun command. In this post we’ll examine this command’s history, why it’s useful, and its new-found resurgence in threat detection implementation.

The earliest operating system release that shows support for shun is PIX OS 6.0. As a long-time Cisco security instructor, I remember this being released nearly eleven years ago! Although not explicitly stated, this command provides for immediate blocking of either specific connections or all traffic originating from a particular host. This blocking action can be implemented either manually or via an Intrusion Detection (IDS) or Intrusion Prevention System (IPS) automatic signature triggered action.

While IDS/IPS blocking on a router uses an access-list, this solution would be unworkable for a PIX or ASA because of the way access-lists operate on the security appliances — only the initial packet of any connection is examined. To take this a step further, once a source IP address is in the connection table, any applied access-list deny statement for this IP source address is irrelevant for those existing connections. The shun command “fills the gap” by being used to stop any/all traffic from even those source addresses that already have established connections.

The syntax for the shun command in the original PIX OS6.0 document is as follows:

Note that this syntax includes provision for connection-related ports and protocol. The emphasis is given here because as the IPS Blocking course material indicates, the shun command is limited to blocking hosts. The writer further investigated this discrepancy and noted that even though a signature might be configured for Block Connection, the actual implementation on the ASA via the telnet or ssh session is only for blocking the source IP address. In addition, the IPS sensor will both stay logged into the ASA after being provisioned for connectivity and will remove the shun after a configurable time interval.

When PIX/ASA version 8.0 code was introduced in 2008, a new feature was added which expanded the use of shun beyond either a manual or IPS-initiated implementation. A three-tiered implementation of Threat Detection, when properly configured, could not only identify attackers attempting reconnaissance or Denial of Service (DoS) but also stop an attacker if the Scanning option was enabled, again using the shun command. The table below from the Configuring Threat Detection chapter of the Cisco ASA 5500 Series Configuration Guide shows the history of this capability: 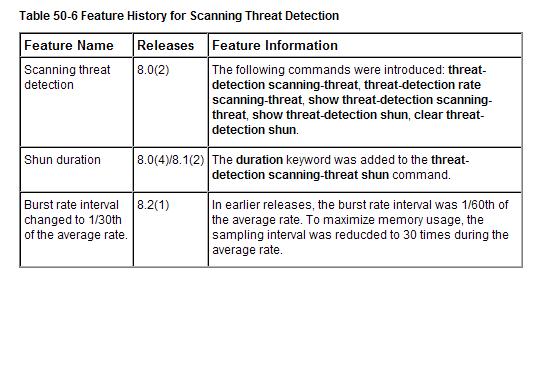 As the above table indicates, the allowance for expiration of the applied shun was not in the originally deployment. What is not shown above is the ability to exclude hosts from being shunned. This is typically implemented by creating an object group of a host or network from which vulnerability analysis (typically scanning) originates and is consequently misinterpreted as malicious.