When integrating a Voice over IP (VoIP) system into an existing network it is very important to have a good understanding of how much bandwidth is utilized for each call on the network. For most people, just starting out the bandwidth calculations can be a very daunting task.

But, with a basic understanding of the components of a VoIP packet, the process of calculating the VoIP bandwidth becomes easier to understand. It is very important to understand the bandwidth allocation for VoIP packets on the network. If underestimated this could lead to latency issues and poor application performance.

There are a few key factors in calculating how much bandwidth is required to carry voice on an IP network. Some of the more important factors are:


Codec
The function of the codec is performed in a hardware device called a DSP (Digital Signal Processor). It is the job of the codec to convert analog waveforms into digital waveforms to be packetized and transmitted in an IP packet. The codec samples the analog wave form typically at 8,000 times per second for a fixed time period to create a frame of data. The time period is usually 10ms, 20ms, or 30ms, and depends on the codec deployed.

For example, a G.711 codec sampling at 20ms will produce 50 frames per second and a 64K size payload based on the following numbers.

Frames and Packets
It is also important to realize that codecs place more than one frame of VoIP data into one IP packet. G.729 places two 10ms data frames into each IP packet. It is more efficient to place two frames in each packet as it reduces the transmission overhead by reducing the number of packets sent. This is a tradeoff between latency and packet overhead. Longer sample periods produce high latency, which reduces the quality of the call. Longer delay makes conversations awkward, with the two people talking over the top of each other. The header size becomes more significant as the sample period becomes smaller because the percentage of data to overhead becomes larger.

IP Header
The IP header consists of the following

Layer 2 Overhead
Once the packet moves down the OSI (Open System Interconnection) model to layer 2, it wraps the layer 3 IP packet with a layer 2 information we call Layer 2 overhead. Layer 2 can be Ethernet, ATM, Frame Relay, PPP, VPN or many other layer two transmission types. Each one of these layer 2 types has a different amount of overhead it adds to the packet. One of the biggest mistakes people make when calculating their VoIP bandwidth, is they forget to add layer two overhead to the total amount of bandwidth for each RTP packet.

Sometimes called VAD (Voice Activity Detection), suppresses the transmission of data during times of silence when one person is talking at a time. It is said silence suppression reduces the demand for bandwidth from 30% to 50%. The receiving codec can also generate comfort noise (white noise) while silence suppression is activated. Comfort noise allows the talking person to feel comfortable that the listening person did not hang up on them when the data stops flowing from the silent person.

On-Line VoIP Bandwidth Calculators
There are many on-line calculators as well as IPhone applications. The best tool I have found yet is the IPEToolbox found in the Apple app store. Here is the output of what the voice bandwidth portion of the application looks like. 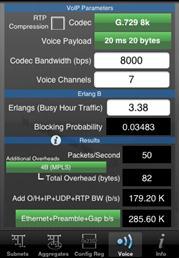