Building Toward Your ’99.999%’ Availability Goal with a First Hop Redundancy Protocol

Many companies have a so-called five-nines goal, meaning that the network needs to be available to the users at least 99.999% of the time. To achieve that goal, IT professionals must consider high availability in the network design, including both physical and logical redundancy.

It’s relatively easy to build physical redundancy in the enterprise network, but network engineers must not overlook logical redundancy.

HSRP was created by Cisco, and VRRP is a standard. However, they both work in a similar way. GLBP was also created by Cisco, but it’s only supported on a limited range of devices, so the focus of this article is on HSRP. In part two this series, we’ll compare HSRP and VRRP, and explore advanced options in both.

Use this Article As Your Introduction to First Hop Redundancy Protocols (FHRP)
This two-part series on FHRPs will provide an overview of the implementation requirements, the basics of HSRP, along with additional information to help draw comparisons between HSRP v1 and HSRPv2 Let’s get started.

Let’s Begin with the Fundamentals of Networking

In order to understand an FHRP, let’s first review the fundamentals of networking.

A brief explanation of networking:

The purpose of a router is to forward IP packets between two devices that are not on the same IP subnet. In order to achieve this, the default gateway on an endpoint (e.g., computer or phone) must specify the IP address of the local router that will forward the packets.

Referring to the simple, no redundancy network in figure one below : 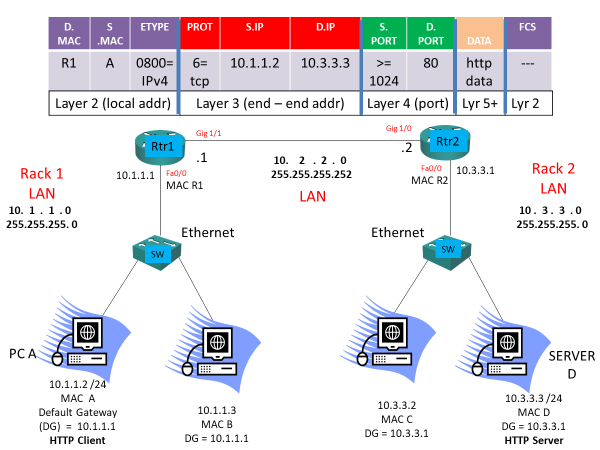 Without Redundancy, You Risk Failed Connections

In order to build the Layer 2 ethernet header, the sender needs to ensure the default gateway address corresponds to the appropriate MAC address.

In the example in figure 1, PC A would have sent an address resolution protocol (ARP) request for 10.1.1.1 and received an ARP reply from Rtr1 given that it is 10.1.1.1 and its MAC address is MAC R1. However, there is no redundancy built into figure 1, so if Rtr1 fails then the clients on the 10.1.1.0/24 subnet will not be able to reach any other subnets.

A typical hierarchical design for an enterprise network with physical redundancy has three layers:

Clients typically connect to the access layer and the servers are typically located in the datacenter, reachable via the core network.

See figure two for an example. 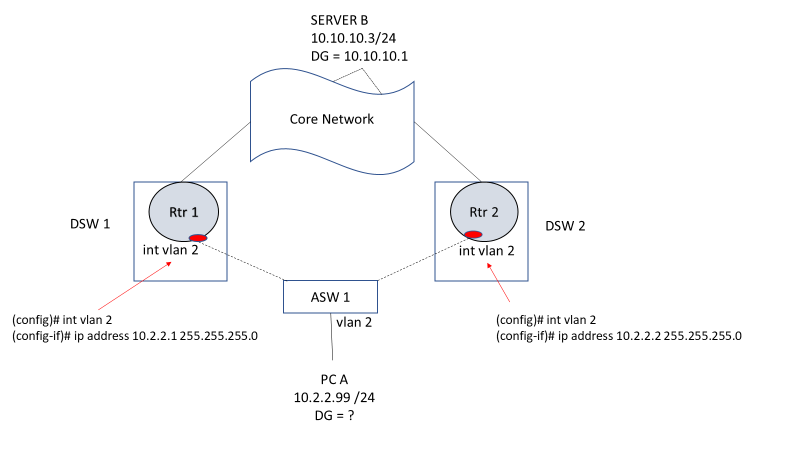 For the purposes of this example:

Multilayer switches (MLS), or Layer 3 switches, are often used at the distribution layer. MLSs are a Layer 2 switch and a Layer 3 router in the same physical box. For this example, will focus on the routing element of the MLS, which is illustrated in figure two as Rtr 1 and Rtr 2.

In figure two, redundancy has been built in at Layers 2 and 3: Distribution and Core.

Vice versa, if we configure the default gateway on PC A to be 10.2.2.2 (Rtr 2), what happens if Rtr 2 fails? The same logic holds true. PC A wouldn’t know there is an alternative path.

What’s the solution for this scenario? Enable an FHRP, such as an HSRP on Rtr1 or Rtr2.

HSRP is a protocol that allows two routers to appear as one to an endpoint’s default gateway, even though the routers remain and function independently. Each router still has its own routing table, routing protocol, static routes, and running-config and startup-config. They remain totally separate.

How to Configure the Basics of HSRP

In the IOS, all the HSRP commands are at interface mode and all start with the command “standby.” There are many optional HSRP commands but only one mandatory command is required to enable HSRP.

The only required command to enable HSRP:

In figure three, notice the identical mandatory command (shown in red) has been configured on both SVIs. This is essential, because in order for HSRP to work the following has to match between the routers: 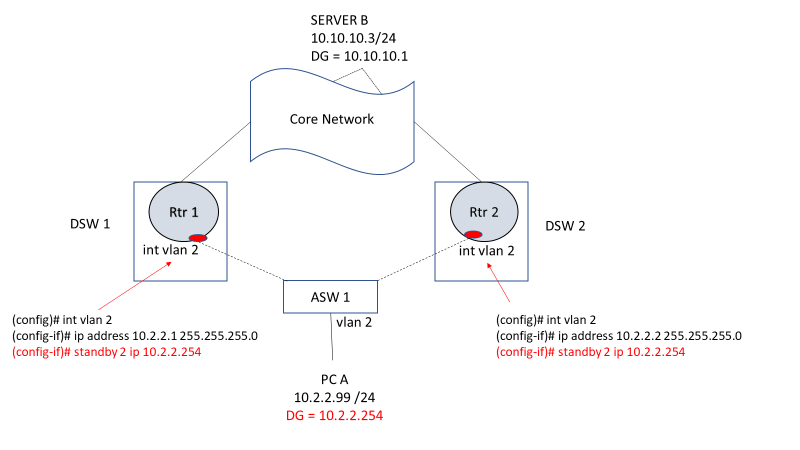 HSRP uses its own HELLO packets for the routers to discover each other. Any interface with HSRP enabled will automatically start sending HELLO packets by default every three seconds. The format of the HELLO packets depends on the HSRP version.

The differences between HSRP v1 and HSRP v2 are shown below in figure four. 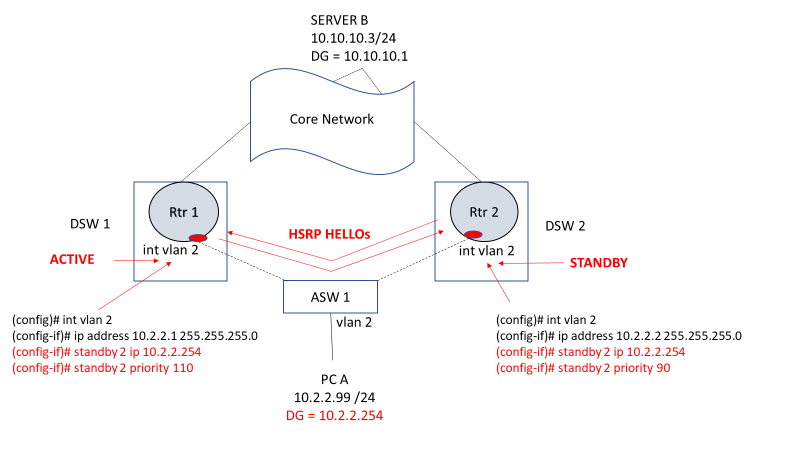 See How HSRP Adds Redundancy in this Step-by-Step Sequence

Now HSRP has been enabled, let’s refer back to the fundamentals of networking with a step-by-step example that reflects figure five:

At this point, all functions as intended. The active router (Rtr 1) is forwarding the packets from the 10.2.2.0/24 subnet, and the standby router (Rtr 2) is ready to take over if necessary.

Figure 6: Frame from PC A

How Does Failover Work in HSRP?

The key to failover in HSRP is the HELLO Packets.

If Rtr 1 fails, as seen in figure seven, then the standby router will no longer receive HELLO Packets. Consequently the standby router (Rtr 2) will promote itself to active after the HSRP hold timer expires; the default is 10 seconds. 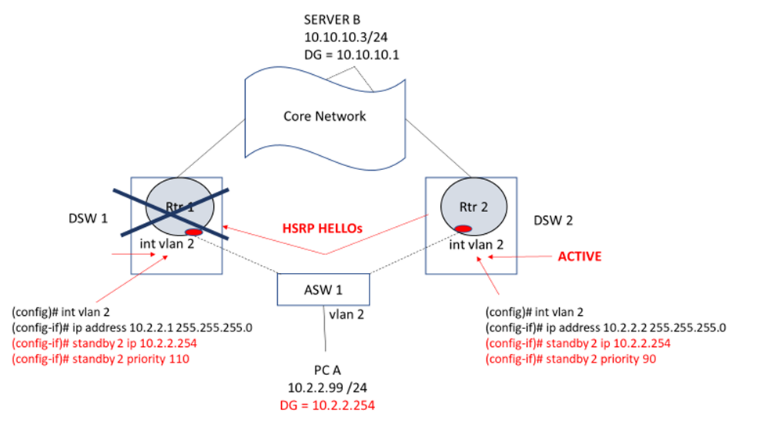 You’re a Few Steps Closer to 99.999% Availability Thanks to HSRP

The desired first hop high availability goal has been achieved by building physical redundancy into the network and by configuring a protocol that gives logical redundancy for the default gateway of the endpoints, namely using HSRP.

Part two of this article will explore HSRP further, including the pre-empt command and modifying the timers to improve failover time. It will also look at similarities and differences between Cisco HSRP and VRRP.

If you want to truly achieve that five-nines goal, you should consider a more in-depth approach to learning about Cisco solutions. Take a look at these courses: