RIP is a protocol that is used for routing IP networks. It was designed in the early 1980’s for communication between gateways (computers with two NIC’s). It is the oldest routing protocol used by the network industry and is considered by many to be inefficient or border-line obsolete.  However for CCNA students it important to understand RIP, as well as how to configure and troubleshoot it. This post covers RIP’s baseline features.

First, the metric for RIP is hop count, where a hop is a router or gateway. When a router or gateway receives a packet, processing required for the delivery of the packet would insert latency (Processing Delay). The delay is cumulative, so the best path will always be the chosen based on fewest number of hops. However due to this delay, RIP has a maximum hop count of 15, so 16 hops is considered inaccessible. 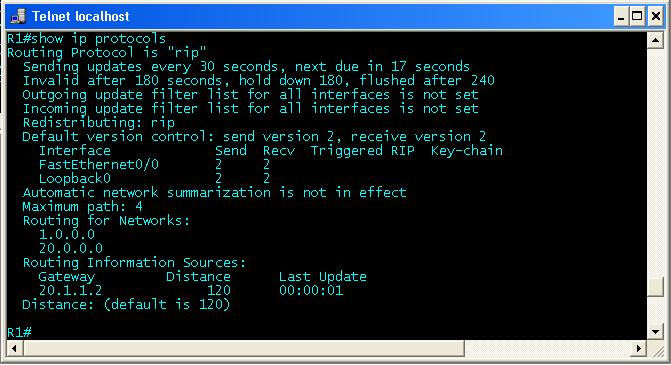 The period between routing information sent between neighbors is the Update interval. This is the primary timer used in RIP and convergence is derived. Also each RIP update can only contain a maximum of 25 network entries. A router running RIP with 100 routes would send a 4 updates packets every period. Imagine if a routing table had 10000 routes. Four hundred updates would be sent every 30 seconds! By default, the timer is set to 30 seconds. Example 2 displays updates being sent and received every 30 seconds.

The next timer is the invalid timer, is Interval of time after which a route is declared invalid.

This interval is measured from the last update received for the route. The route becomes invalid when there is an absence of updates during the invalid time that refresh the route. The Invalid timer is by default 180 seconds. 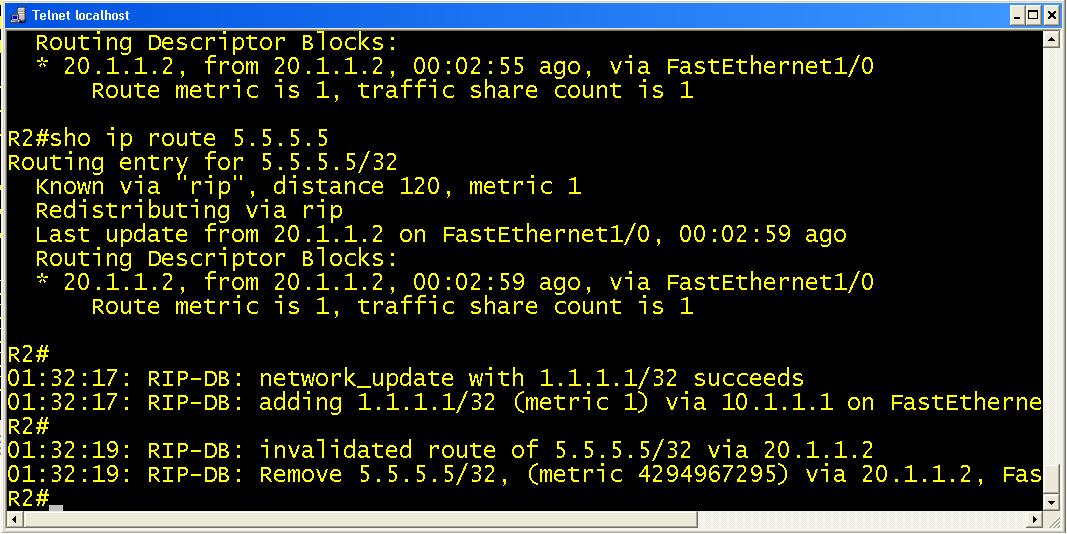 Above in example 3, the show ip route command shows that the route 5.5.5.5/32 displays that the last time and update was received from neighbor 20.1.1.2 was 179 seconds. At 180 seconds the route was become invalidated and will be sent in the update to neighbors with the metric of 16.

Debug ip rip is running in this example. You can see verify the rip database with the show ip rip database command and see that the routes are marked as possibly down. This means that the router will still attempt to send packets destined to 5.5.5.5 until the flush timer is reach.

The hold-down interval is the duration in which routing information regarding better paths is suppressed. A route enters into a hold-down state when an update packet is received that indicates the route is unreachable. The route is marked inaccessible (possible down as seen from example 4) and it will also be advertised as unreachable to other downstream neighbors. However, a router will continue to forward packets until an update is received with a better metric or until the hold-down time expires. When the hold-down expires, routes advertised by other sources are accepted and the route is no longer inaccessible. By default this interval is 180 seconds.

The flush interval is the period of time that must pass before the router will flush an inaccessible route from its routing table. The default is 240 seconds.

This concludes the baseline for RIP. The next blog discussion we will focus on the difference between the versions of RIP.