If you’ve been wondering what are some good IT pranks for April Fools’ Day—or any other time of the year—this is the post for you. Whether you’re an IT pro with decades of experience or a noob who is about to learn that holding CTRL+SHIFT+ESC is a faster way to access the task manager (you’re welcome), we have an IT prank for you. 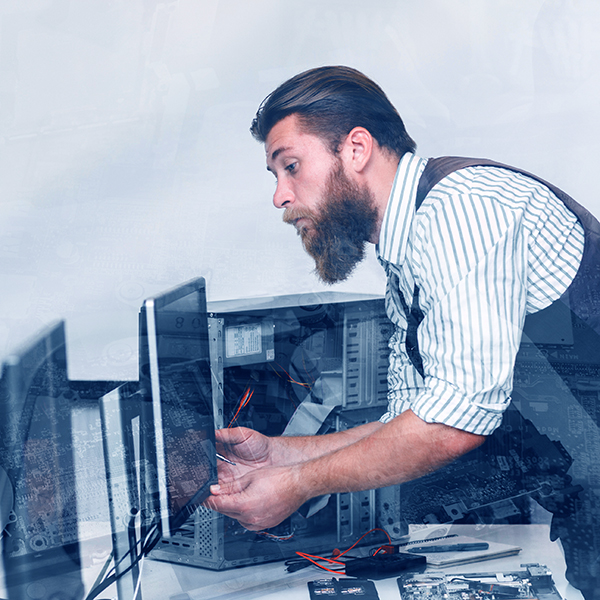 First, let’s be real for a second:

*These pranks are lighthearted.
*If the prank involves accessing other people’s computers, know your company’s policy.
*Save your target's work on their computer. Don't put a person in a position where they shut down their computer and they lose their work.
*Don’t end up in jail. If you do go to jail, we accept no responsibility. And no, we won’t accept your collect call.

Hang a sign over the copy machine that says, “This machine is now voice-operated. Please speak directly into the machine. For example, ‘OKAY COPIER, print three copies on 8.5 by 11-inch paper.’ Or, ‘OKAY SCANNER, scan document and email to youremail@yourcompany.com.’” Submitted by Dave, cybsercurity professional.

Help! My Monitor Display is Sideways

Turn the computer display upside down

For PC users: Use this shortcut to rotate someone’s screen: Hit CTRL + Alt + Left/Right/Down arrow. How to fix: If your victim can’t fix it, you can also be the hero. Hit CTRL + Alt + Up arrow to correct.

For Mac users: The process is a little more involved. Read How to Rotate a Mac Screen. 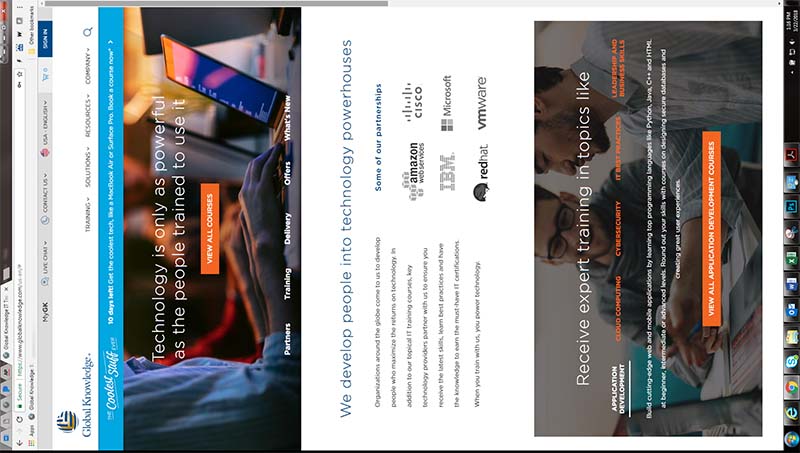 My Cursor is Always Spinning

How to do it: Windows: Start > Control Panel > Hardware and Sound > Mouse. The “normal select” cursor should be highlighted by default. Click the browse button and select the appropriate busy icon.

If the user can’t figure out how to change it back, retrace your steps and click “use default” and OK.

Daniel, a networking and security professional, pulled the following prank back in his college days:

My roommate never saw the need to use a password on his computer, so I was trying to figure out a funny, but harmless way to show him why he should secure his computer.

This prank requires basic knowledge of Microsoft Windows (my description is for Windows 7 but it can be done on any Windows system). If you follow the steps below exactly, this can remain a harmless prank—be careful not to delete anything!

1. Take a Print Screen of the target’s desktop and save the image somewhere you can find it again.
2. Create a new folder on the desktop and name it something innocent like “files.”
3. Click and drag all icons, shortcuts, files and folders into the new folder.
4. Move the folder to the right side of the screen so that only a small edge is visible.
5. Right-click on the task bar and go to “Properties.” Check the “Auto-hide the task bar” box and click “OK.”
6. Navigate to the location of your screenshot. Right-click the file name and click “Set as desktop background.”

The stage is set.

Now sit back and watch the fervent mouse clicks of your victim trying to click icons that don’t exist, a frozen start menu and files that won’t open. If this person has any sort of technical skill, they will catch on quickly. If they’re non-technical, make sure you watch over the process to make sure they don’t do anything to break their own machine. This is a fun and easy IT prank that can be done over and over again—unless you want to keep friends.

My 13-year-old son “borrowed” (i.e., stole) my phone for a few minutes. In that time, he managed to figure out my password and changed my keyboard settings so that every time I typed “No” it autocorrected to “Yes.” The next day he texted me asking to go to the local skate park. I kept typing “No” but I was texting him back “Yes.” It was so frustrating, but once I realized what was going on, I had a laugh about it. When I arrived home I could tell he was dying to tell me about the prank. He was so proud of himself and I had to admit it was pretty funny. And, I let him go ride at the park. I think he should do the prank again, but on his dad! I will definitely be getting revenge on him—he doesn’t know what he’s started! Submitted by Melissa, a product manager who has been subjected to multiple autocorrect pranks and dished out some of her own.

To undo the keyboard setting, it’s easy, follow the same steps and delete the entry.

We did a trick on a coworker right before he went on vacation. As he was wrapping up his work, he stepped away from his computer and we pounced. We opened Microsoft Word and added an autocorrect rule that inserted "Melissia is incredibly awesome" when he typed his name. (We were banking on him not proofreading.) Then we had to wait until he returned. When he came back, let’s just say Melissa was receiving more praise than normal. Ever since then people started locking their workstations when they left their computers.

If you want to be more subtle with your autoCorrect, here’s a list of the 100 most common words.

How to do it: This sets up autocorrect for Microsoft programs except Outlook. Click "File" > "Options" > "Proofing":

Sandeep Singh, of iTechFever, provides a step-by-step YouTube guide using .txt and .vbe files to send your victim on a wild, yet harmless, ride. In this prank, the victim will be subjected to multiple pop-ups, alerting them that a virus has been detected and eventually that hackers have taken over their system. The prank concludes with a pop-up alerting the user that they’ve been pranked. This one will really get them panicking!

Why Isn’t My Mouse Working?

After my team and I returned to our desks after a meeting, people started sounding agitated and someone asked if anyone else’s mouse was acting funny. Someone quickly realized what was going on and said to look under our mouse. We did and and a grinning Troll Face was grinning back at us.

The prankster had gone around to the empty cubes and taped the troll face over our mouse optical sensors. 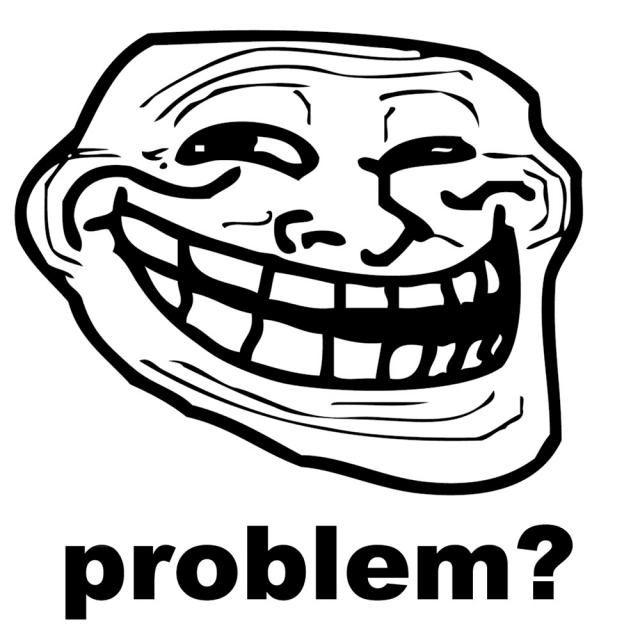 Link to a high-resolution troll face.

A Mouse with a Mind of its Own

Once upon a time, there was a meeting for the product team to collaborate on a spreadsheet in the conference room. Naturally, the job of connecting to the projector fell upon the newest person in the group, who also had the least experience with spreadsheets. Using only some misdirection, someone was able to plug in a wireless mouse dongle into the USB port at the rear of the hapless user’s computer.

That’s when the fun started.

Sitting at the opposite end of the conference table, with the rogue mouse hidden behind an open laptop, the team allowed the presentation to begin. At first, everything was normal. The presenter was able to control the pointer and jump to various cells on the spreadsheet to enter data.

However, the computer began to slowly take on a life of its own. At first, the pointer would just randomly jump to a new location (while those around the table stifled grins). When the presenter realized something was amiss, the real fun started.

The presenter complained about the mouse, and someone suggested that it must be the new voice-controlled version of the spreadsheet. As an experiment, they said “Computer, go to cell B2.” Sure enough, the pointer moved to that position. Then someone else said, “Computer, highlight cells A1 to A7,” and it happened. However, when the presenter tried to command the computer, the pointer did the opposite of what it was told. Very spooky … and it was all under control of the person at the other end of the table.

The game finally collapsed when everyone broke out laughing. The presented discovered the offending dongle and removed it, and everything was back to normal.

It’s a great, harmless prank (REMEMBER to save your work first!!), requiring no technical skill, but some imagination. Beware if someone suggests that you have a voice-operated computer. Submitted by Dave, a cybersecurity professional.

My Computer is Realllly Slow

When a coworker is out of the office, remove all memory from their computer except for the minimal amount, and wait for the "my computer is slow" complaint to eventually roll in.

How to do it (assuming a desktop computer):

1. Shut down the computer completely. (Powered off and unplugged from the wall)
2. Open the case (which depends on vendor for exact instructions)
3. Locate memory DIMMS (long, thin chips, usually in pairs)
4. Remove all except one
5. Close case
6. Wait and watch

From Chad, a technical trainer and author, took a trip down memory lane.

Pranks from the 90s

When a coworker had been particularly nasty to everyone in the IT department, we took the opportunity to change his screensaver to the brand-new released "screen melting" effect. When it activated, we got a frantic call about how he never puts ANYTHING on top of his monitor and has no idea how it could have happened.

Flushing the Toilet when on a Conference Call

The old Sun workstations used to have audio files you could play through the speaker. One of them was a flushing toilet. We used to log in to everyone else's workstations and flush the toilet anytime they were on an important conference call.

When I was working in the CS lab at the school I attended, I used to catch people who didn't lock their workstation when stepping out of the lab (which was against the rules), and I would change their login script to log them back out again, and log them out so they had to wait until the following day for help to get back in.

Don't forget to sign up for our monthly newsletter.