ITIL (short for Information Technology Infrastructure Library) is a widely accepted series of five books that outline best practices for the management of IT services. It is praised for offering a simple and practical framework for the alignment of IT services with the larger needs of a business or organization. ITIL is recognized for its ability to bring smart improvements to any IT service management process.

Originally offered by the British government, the ITIL approach is now the cornerstone of IT management in organizations ranging from Disney and HSBC to NASA and Britain’s National Health Service.

The ITIL Core library covers five key stages in the IT service management lifecycle: Service Strategy, Service Design, Service Transition, Service Operation and Continual Service Improvement. The guidance offered by the library is not specific to any organization or industry; rather, it provides a baseline from which any sort of IT initiatives can be planned, implemented and evaluated.

What is the ITIL Foundation Certification?

The Foundation Certification is the entry-level ITIL qualification. It offers candidates a general awareness of the key elements, concepts and terminology used in the ITIL service lifecycle. It is a prerequisite for all subsequent ITIL certifications.

What is the format for the ITIL Foundation exam?

The exam is a one-hour, multiple-choice test. It’s a closed-book exam, with no electronic devices allowed. There are 40 questions to the exam, and each is worth one mark. A passing grade is 26 marks, or 65%.

What are the ITIL Certification Levels?

The ITIL Foundation Certification is the starting point for any ITIL learning path. Once that entry-level qualification is achieved, learners can proceed to four subsequent levels of certification:

The diagram below shows the five main levels of the ITIL Certification path, along with the options and opportunities along that path. 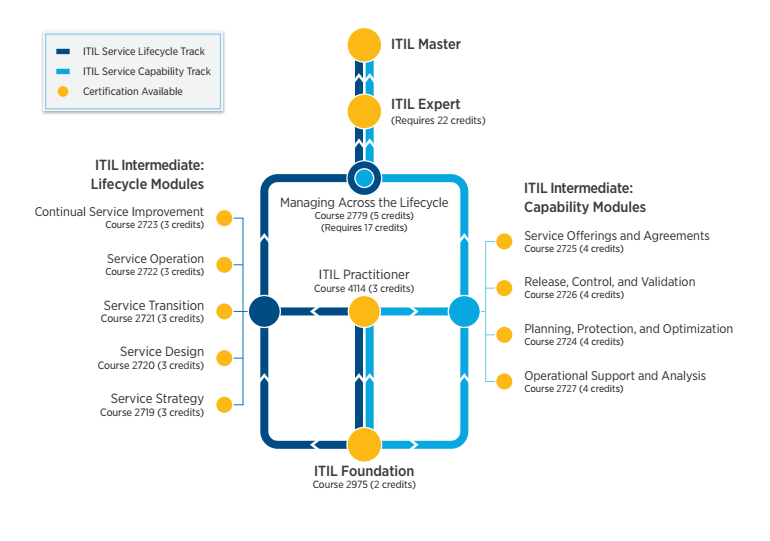 Why is ITIL so popular?

The ITIL approach to IT service management offers a number of significant benefits.

Because ITIL was not designed for any specific industry or organization, it offers a welcome flexibility in terms of how and where it is used. And because ITIL is based on its authors’ practical experience (as opposed to academic theory), it is immediately useful in real-world situations.

ITIL is noted for its ability to promote communication and clarity between IT and the business it serves. With ITIL, roles and responsibilities are clearly defined, customer value is measured at every stage, and organizations are prompted to be proactive rather than reactive. The vagueness of traditional communications between IT and business is simply not allowed under ITIL.

ITIL is also lauded for integrating financial management throughout the service lifecycle. Under ITIL, costs are planned and controlled, and can be justified at any stage.

And ITIL increases customer satisfaction in ways that technical excellence alone cannot. Thanks to ITIL’s constant measurements and improvements, quality assurance does not end with the customer acceptance test, but continues throughout the service lifecycle. This emphasis on an ongoing relationship contributes to ITIL’s reputation for increased customer satisfaction.