To make deliverology work, you have to start with your people

The quick definition of deliverology is simple: It is a system that helps governments keep their promises.

But as straightforward and obvious as deliverology’s goals might be, governments struggle to achieve them on their own. For that reason, deliverology is having a profound impact on government services around the world. To date, more than 40 countries have committed to the methodology, and Canada is very clearly — and publicly — on board. The task now is to figure out exactly how to make deliverology a reality.

We know that deliverology will involve new technology, certainly. But deliverology calls for more than that. It denotes the flawless introduction of new services, as well as continuous improvements to existing ones. Achieving this will take a comprehensive vision and business analysis, as well as significant leadership and project management skills.

In addition, deliverology requires something that is more of an attitude than a skill: It relies on the spirit of nimbleness that is the hallmark of the digital age. It asks everyone to come to work with an entrepreneurial drive that supports innovation and excellence.

Chart: Deliverology has a better chance of success if the mandate is properly communicated to staff 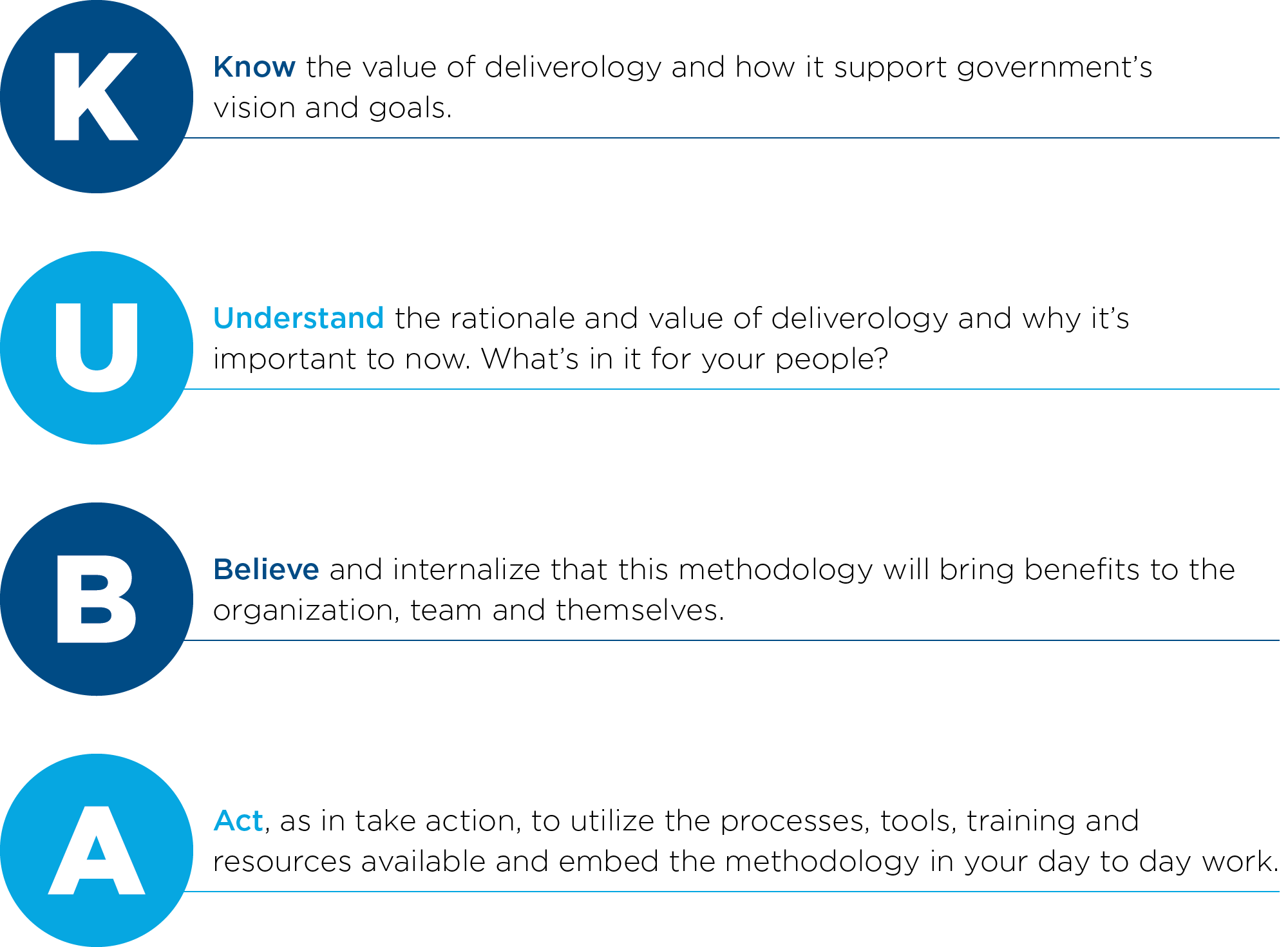 To put it another way, deliverology demands that everyone deliver. So, how do we make that happen?

To begin, it’s helpful to think about deliverology in terms of the historical context in which it arose. It’s no coincidence that deliverology gained traction at the same time the digital revolution was transforming our expectations of what everyday people can do. Forty years ago, the day-to-day work of government was shrouded in mystery. That is largely because the technology used by government was not found in ordinary households. And because most taxpayers had no frame of reference, they also had no informed opinion on how quickly or cheaply public services might be delivered.

The consumerization of technology has changed all that. Thanks to the rise of Internet, mobile, cloud and other technologies, there is no longer any sense of mystery around service delivery. Canadians expect excellence to be delivered quickly, and it is all because they now know how much technology can do for them. They know that it is possible, with just a few clicks, to buy shoes or find their soulmate or map out the quickest route to any destination. (And before long, they will also know what is possible from advances in artificial intelligence and machine learning.) In just a few short years, cost-efficient e-commerce has gone from being miraculous to being just the baseline expectation of consumers. And since most consumers are also taxpayers, they now expect that kind of seamless innovation in their government services.

With everything the digital revolution has enabled, it is not surprising that the World Economic Forum has described it as “The Fourth Industrial Revolution.” When viewed as part of this revolution, deliverology suddenly becomes easier to analyze, at least from the standpoint of making it a reality. Thinking in digital terms allows us to see deliverology for what it really is: the fulfillment of government’s potential as a digitally driven entity.

Of course, every organization today wants all the things that are made possible through digital. But wanting is not the same as having, alas. A recent IDC Canada study (sponsored by SAP Canada) showed that 83% of Canadian enterprises still lack the in-house skills needed to do battle in the digital economy. They’re still in need of capabilities around big data analytics, mobile, IT security and design thinking. These disciplines are the nuts and bolts of digital delivery, which effectively makes them the engine of government deliverology, too. It is reasonable to assume that these digital skills gaps are as much an issue in the public sector as they are in the private.

And, as daunting as they are, these technological challenges are just the tip of the iceberg. In his book Deliverology 101, Sir Michael Barber breaks down his methodology into key steps, including developing a foundation for delivery, understanding the delivery challenge, planning for delivery and driving delivery. All of these key steps require the skills of trained leaders and project managers.

Successfully implementing deliverology may call for thousands of these leaders and project managers. As Barber explains, the starting requirements for implementing the methodology include the creation of a Delivery Unit for each goal. Each Delivery Unit must have a passionately involved leader who will “design, organize and build a high-performing Delivery Unit to oversee your delivery effort. This unit will be the primary source of a new delivery culture that is characterized by five words: ambition, focus, clarity, urgency and irreversibility.”

The attitudinal features described above are readily found in startups run by digital natives. But whether public or private, organizations set up in the pre-digital era will have more work to do if they are to adopt the digital way of thinking. The great irony of the digital age is that, for all the hardware and software involved, its achievements still depend on the abilities of the people using it. As SAP Canada president John Graham said, “It’s time for an assessment of what expertise an organization needs to enter the digital economy and thrive in it.”

Since the government already has experienced personnel in place, the most urgent task is to nurture that talent. And the best way to nurture talent is with the kind of training that engenders the qualities associated with the cream of the digital workforce: confidence, competence and a secure sense of empowerment.

The timing of such training is critical. In the pre-digital era, the upgrading of workforce skills typically came after new technology was deployed. Today, technology and talent both have to hit the ground running, and there is little public tolerance for mistakes. Today’s public sector workers have to be engaged, enabled and empowered to be accountable for organizational outcomes. The need today is to plan for skills upgrading that begins in the planning process and continues throughout implementation. Today, the stakes are simply too high to allow training to be treated as an afterthought.

There is no turning back. Deliverology is here. And for decision makers in government, the challenge now is to set up their teams for success. Answering the challenge will take an approach that prioritizes skills planning and training for an ever-changing environment. Today, government personnel must be fully prepared to improve existing projects and deliver on new ones. Those capabilities will require a range of new skills, and the training in those skills simply can’t wait.

The great irony of the digital age is that, for all the hardware and software involved, its achievements still depend on the abilities of the people using it.