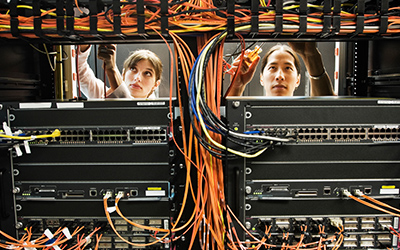 While the recent trend towards cloud computing might make it seem like virtualization is new, it has existed in some form for many decades.

As far back as IBM’s mainframe era in the 1960s, virtualization played a part in the way computing was handled to make it more efficient and reduce the load on the individual machine.

Thanks to the advances in technology since then, modern virtualization can be used to solve many of the issues that businesses commonly experience, including data center sprawl and high operating costs.

With that in mind, virtualization skills are highly valued by organizations. Some virtualization-focused certifications rank among the highest paying in IT, according to our research. See our 15 Top-Paying IT Certifications List for more.

The five most popular types of virtualization include:

Creating a virtual desktop infrastructure, or VDI, makes it possible to work and store files in locations that everyone in your team can easily access no matter where they work.

Desktop virtualization allows people to access multiple applications and operating systems (OS) on a single computer because the applications and OSs are installed on virtual machines that run on a server in the data center.

A virtual machine (VM) is essentially a physical computer, like at your desk, but in software form. VMs are organized using hypervisors, which help the physical computer and the VMs run as intended.

For enterprise-level businesses, virtualizing desktops allows employees to log in remotely in case of a natural disaster or health issue that keeps them from coming into the office to work.

Having a virtual desktop setup can be a vital part of the business disaster recovery plan or response to any unexpected event that stops workers from coming into the office. Top solutions providers in this space include VMware and Citrix.

Through application virtualization, users can access a remote version of an application that isn’t installed on their individual machine.

Virtualizing an app allows for seamless use for the end-user, making it possible for the employee to work remotely with the same key programs installed in the office.

There are two distinct kinds of application virtualization:

Remote applications run on a server that mimics the user desktop and can be accessed by authorized users regardless of their location.

Streaming apps run just one instance on the server and provide local access to the app.

Remote app streaming is the more popular approach, thanks to the extended reach it grants.

With just one instance of the app to manage and fix, an organization’s IT professionals can save time and effort through app virtualization compared to installing the app on each user’s computer.

Any patches or updates only have to be done once instead of potentially hundreds or thousands of times. Large enterprises can find the savings generated by app virtualization substantial as employees can access virtualized apps through cost-effective computers.

Virtualizing a server allows for a better division of resources, as it lets the administrator divide one physical server into multiple virtual servers. These virtual servers can then be used to run a distinct operating system and any applications needed. By doing this, businesses can decrease operational costs while enjoying faster deployment times and better application performance.

Virtual servers share CPU, memory, storage, and networking capabilities, which are pulled from the hypervisor of the physical server the virtual one is built on.

Storage virtualization is a game-changer for companies that create a lot of data daily. Instead of using physical storage space, virtual storage uses software to store the data in the cloud. All of a company’s storage disk arrays are placed in the same virtual pool, made into virtual disks, and sent to the host server for storage.

With the data remotely stored, you can pull from any of the virtual storage sources within the data center and group them together, customizing how and when key data is stored. The pooling of storage resources into one virtual area allows for one administrator to manage them remotely.

There are two kinds of storage virtualization:

Network virtualization blends the physical and virtual network, using components from both to create an environment that is much easier to administrate than a strictly physical one.

Using software, network virtualization disconnects the virtual network from the physical hardware, making it possible to use switches to direct network traffic and manage resources through traffic surges.

Network virtualization is key to developing new programs and apps. By testing newly developed apps on a virtual network before releasing them to the public, developers can catch any potential flaws or bugs and optimize the performance of the app based on how it performs in the virtual environment.

The Advantages of Virtualization: Easier Management, Efficiency, and More

Implementing each of these types of virtualization can benefit the enterprise in different ways, but as a whole, moving from a traditional to a virtual approach helps your company be agile and easy to scale.

In addition, virtualization streamlines the needs of your employees and prevents issues before they can occur, freeing your IT department to work on more complex tasks.

But what’s the best approach to virtualizing your IT infrastructure or refining your current landscape?

While there are several factors, including virtualization service providers, proprietary software and so on, much of it comes back to training, skills, and certifications to carry out a virtualization strategy at your organization.