The Benefits of Cisco ACI in the Data Center 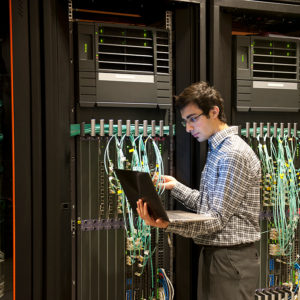 In 2013, Cisco released their Software Defined Networking (SDN) solution for the data center known as Cisco Application Centric Infrastructure (ACI). For many years, the networking industry has been asking for an approach to configuring networking devices more efficiently than having to individually configure each and every router and switch.

Cisco’s release of ACI is the SDN solution to automate networking moves, additions and changes in the data center. The adoption rate of ACI in the industry in the first four years has been quite impressive.

An ACI implementation consists of the following three types of hardware components that work together to create the entire ACI fabric:

Instead of managing many different data center switches, the entire ACI solution functions like a giant switch and router combined into one logical device. As an analogy to the existing Cisco Nexus 7000 switch:

While the Nexus 9000 switches provide the physical networking component, ACI can also reach into the following products to configure and automate software networking within the hypervisors:

Additionally, a growing ecosystem of Cisco ACI partners are adding their products such as firewalls, load balancers, SSL offload engines, intruder prevention systems, network taps and a growing list of networking products to add to the overall intelligence of a Cisco ACI solution.  As a result, Cisco has been expanding the global market share of ACI installations at an ever increasing rate.