Part 11 of this blog series looked at Class Based Weighted Fair Queuing. This blog will explore the next queue mechanism; Low Latency Queuing (LLQ). 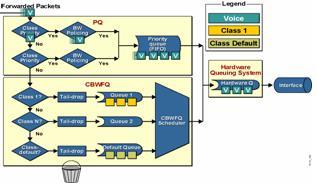 As seen in the previous section of this QoS series, CBWFQ provides user defined traffic classes allowing for more control and functionality than weighted Fair Queuing. CBWFQ uses matching criteria obtained by Network Based Application Recognition (NBAR), or access control lists (ACLs). A queue is reserved for each class and matching traffic is directed to that queue.

Low Latency Queuing
LLQ adds strict priority to the CBWFQ and allows delay sensitive data (Voice and Video) to be dequeued and sent before lower priority packets. This practice gives delay sensitive data preferential treatment over other traffic. To direct traffic to the LLQ, use the priority command for the class after the named class within a policy map is specified. Any class of traffic can be attached to a service policy, which uses priority scheduling, and that traffic can be prioritized over other class traffic.

Without Low Latency Queueing, CBWFQ provides weighted fair queuing based on defined classes with no strict priority queue available for real-time traffic. CBWFQ allows you to define traffic classes and then assign characteristics to that class. For CBWFQ all packets are serviced fairly based on weight; no class of packets may be granted strict priority. This scheme poses problems for voice traffic that is largely intolerant of delay, especially variation in delay. For voice traffic, variations in delay introduce irregularities of transmission manifesting as jitter in the heard conversation. 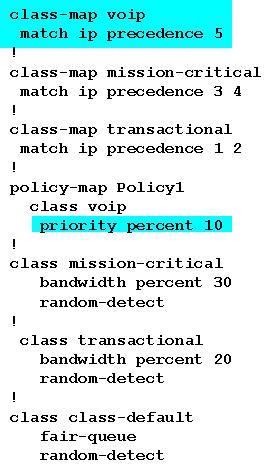 In this configuration notice that the Class-Map VoIP sets the IP Precedence of 5, which sets all traffic with an IPP of 5 to this class. The priority command within the policy-map indicates the VoIP Class is a Priority Queue (PQ) and this traffic will get priority over other queues. In this example, the priority is set to 10% of the bandwidth for this traffic. 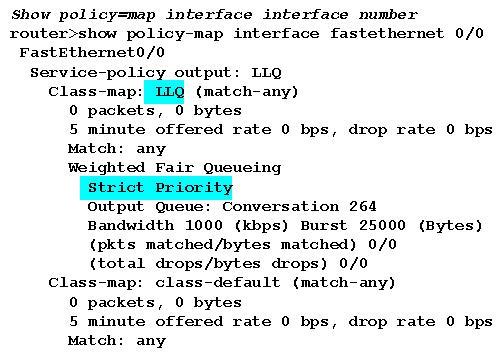