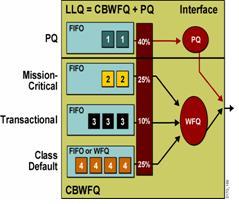 Class Based Weighted Fair Queuing
Once the packets have been matched and the class is defined, a characteristic is assigned to the class. The characteristics that are assigned are bandwidth, weight, and maximum packet limit. The bandwidth is the minimum bandwidth delivered to the class during congestion, and the maximum packets is how many packets are allowed to accumulate in the class queue before tail drops start happening to the worst finish time packets.

CBWFQ supports multiple class maps to classify traffic, with tail drop being the default dropping scheme. Weighted random early detection (WRED) can be used with CBWFQ to prevent class congestion. Guaranteed bandwidth is configured by weights and assigned to traffic classes. The following weights can be used to specify class weight. The reserve default is set to 75%, and must be within the allocated bandwidth. Single service policies cannot mix fixed bandwidth and bandwidth percentages commands.

CBWFQ Best Practice
Cisco has set a best practice called the 75% Rule to help guide the configuration of CBWFQ on Cisco routers. The network administrator configuring CBWFQ should add up the bandwidth requirements for each major application such as voice, video and data. This sum should represent the minimum bandwidth requirements for any given link. This bandwidth calculation should not exceed 75% of the total available bandwidth for the link or Committed Information Rate for Frame Relay and ATM. This rule allows 25% overhead for routing protocols, layer 2 keep-alives and class default traffic. The Max-rerserved bandwidth command can override the 75% limitation set by default for most interfaces, but is not recommend. 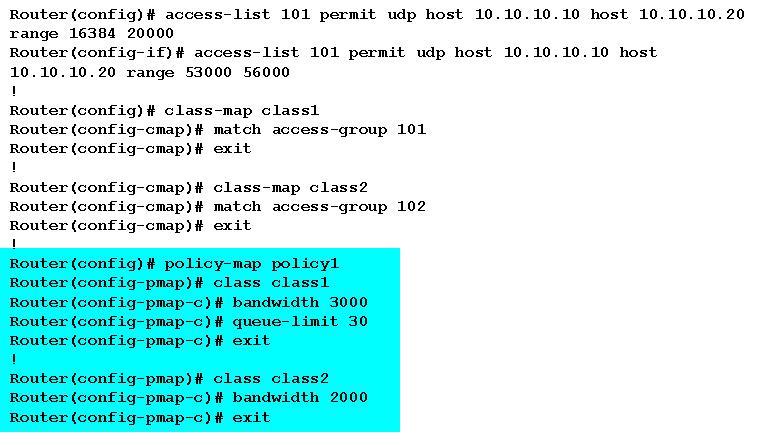 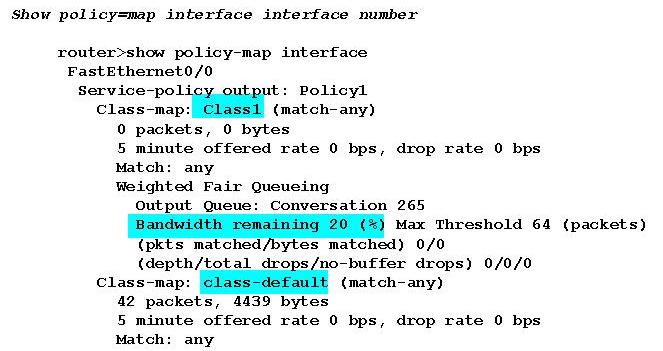 The next blog in this QoS series will discuss Low Latency queuing (LLQ).