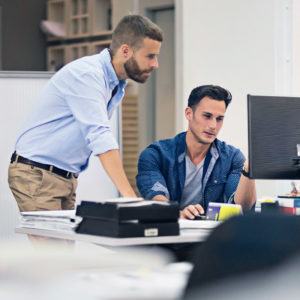 Unlike ITIL, DevOps is more of a philosophy than a formal framework. DevOps, which is short for Collaboration between Development and Operations, arose as a movement within IT best practices when IT managers began to realize that something needed to be done to close the communication and collaboration gap between development groups and support operations staff.

After some time and examination, it became clear that there was no inherent conflict between the DevOps movement and ITIL—the two, in fact, are quite complementary.

On the one hand, development teams are pressured by the business to deliver regular, frequent updates to apps, which are a key component of new and changed services. Small, frequent improvements in functionality can potentially boost user productivity, but also can carry the risk of destabilizing the production environment, affecting the availability of live operational services or causing destabilizing side effects. Operations, on the other hand, is charged with maintaining a balance between being responsive to the business and maintaining a stable IT infrastructure that provides high availability and delivers the service value that customers and users desire.

Development and operations teams often report to different senior managers within the organization. Development’s focus is on building new and improved software applications, responding to customer business units at an ever increasing rate. Secondary thought is given to how another part of the same organization will end up supporting this new or changed app, and what they will need in order to be effective. Emphasis is on delivering incremental chunks of new and improved software on a continual basis, matched to the customer’s specifications, without much regard to how those improvements work or perform in production. Often the attitude is, “The service desk will take care of that.”

3. Establish a uniform understanding of “value” across IT service functions

It is important to realize that “value” is a product of functionality, as well as the performance of that functionality. Not only what the app does, but also “how it does it,” is important. Is it available enough for the customer and user? Is it easy to use? Does it have enough capacity in terms of storage, bandwidth and compute power? Is it secure enough for the customer and users? Development’s focus is primarily the software app and the functionality delivered by that app. In production, however, the new/improved “app” is running on a number of supporting infrastructure services—network services, supporting platform services (mobile, smartphone or other device), interacting with or supported by other apps or services.

The app is in reality an element (albeit an important element) in a “service,” which is composed of multiple elements and supporting services or components. The challenge of operations is to ensure that the whole “service,” of which the app is a key part, is delivering the value sought by the user—in terms of the desired functionality, but also in terms of its performance.

Development groups are typically focused on carrying out time-bound, project-oriented activities—developing discrete chunks of software code within limited timeframes, in order to meet deadlines and deliver increased functionality to apps in production. Their priority is on developing and delivering improved functionality—not so much as how that functionality will operate day in and day out while in production. Operations, in contrast, is charged with supporting both the functionality and the ongoing performance of the “service” of which the application is a major component. And the service must not only deliver the functionality the user seeks, but must also perform to acceptable service levels—levels of availability, capacity, and so forth—on a daily basis.

Are you considering adopting DevOps practices?

Our new course, Adopting DevOps in an ITIL Environment, is designed for clients considering or in the early stages of adopting the DevOps methodology. Learn how to leverage both ITIL and DevOps in a complementary approach.