As is frequently the case these days, I get a brainstorm for an article during a Cisco Security training class I conduct. This summer I taught the Securing Networks with ASA Fundamentals class, which concentrates heavily on the Adaptive Security Device Manager (ASDM) interface. Although some slides show the checkbox for running this product in Demo Mode, no mention is made to the capabilities or functionality of this function. This article serves to give a brief overview of this interesting “add-on.”

Since most of the students I teach run ASA Operating System version 8.2(x), which is managed using ASDM version 6.2(x), I chose to download the latest posted version, 6.2(5). (Make sure you look for the download with the word “demo” in the image name.) This unfortunately failed to launch correctly, as did version 6.2(3). Both versions gave me an error saying the demo software was missing from the install and provided a URL to the old Cisco Security download page. When I installed version 6.2(1), the product launched correctly. The following screenshot displays a previously installed version of the demo release. 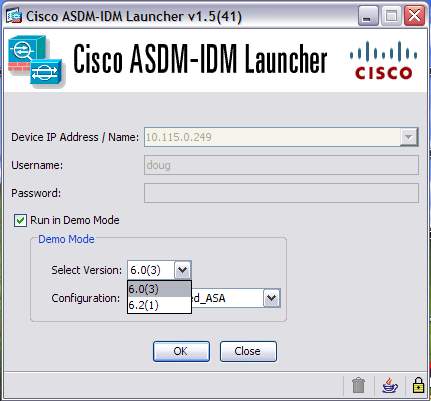 After choosing the desired release, I was given the choice of a number of configuration options as shown below: 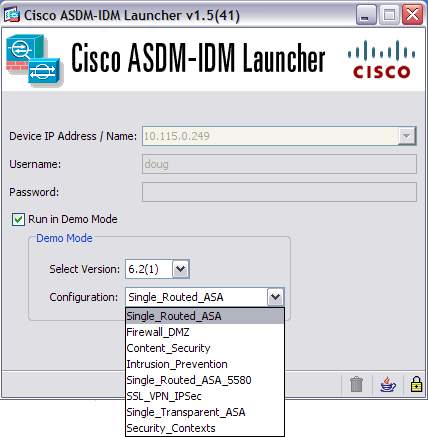 Now here is where it gets interesting. I chose Firewall_DMZ and went to the Home screen to see information about the model of ASA for the sample configuration. 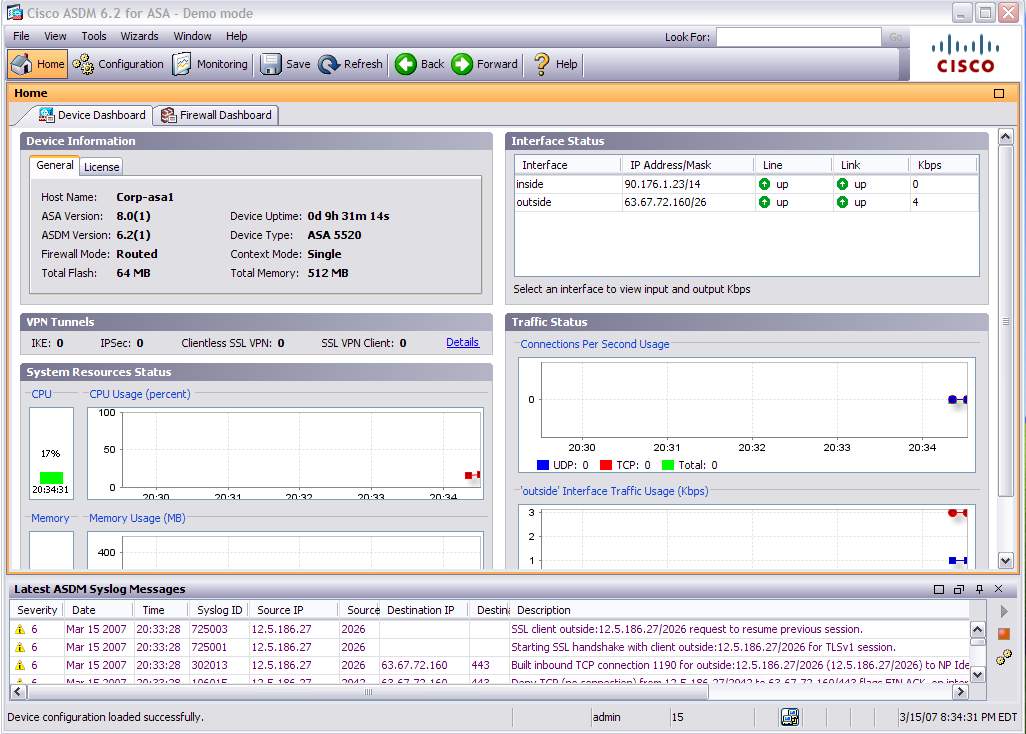 By contrast, here is what I saw when I chose the SSL_VPN_IPSec: 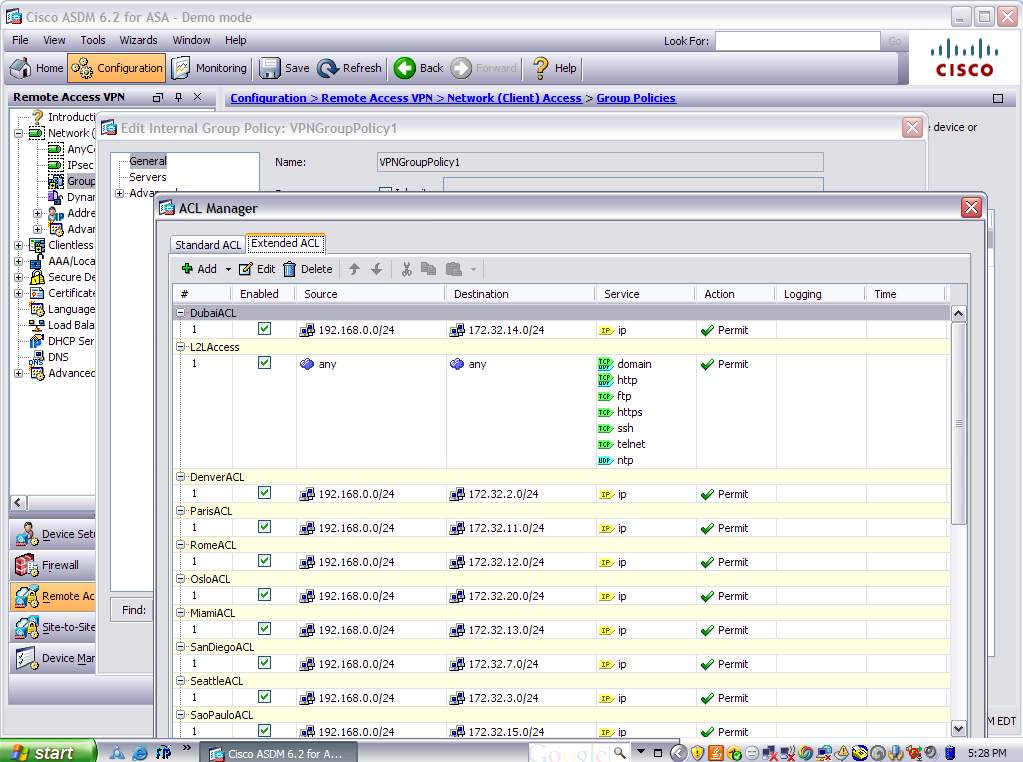 Note that the two models are different! The Firewall_DMZ shows an ASA 5505 while the VPN configuration uses an ASA 5520. What cannot be shown in these screenshots is the impressive animation simulation of typical, live syslog messages received in the bottom window. I found both the content and the display frequency of these messages virtually indistinguishable from “the real thing.” 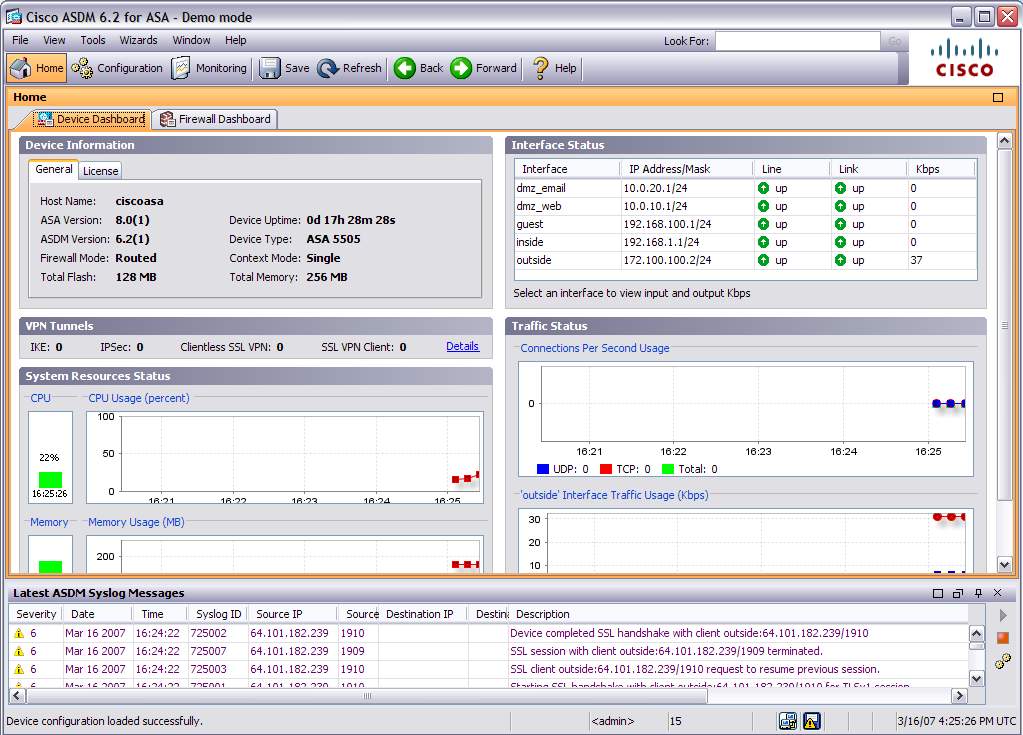 From my experience with the Demo Mode of ASDM, I can say that using this function is an excellent tutorial for not only configuring an actual ASA security appliance, but also for preparing to take the security appliance certification exams.