I recently was presented with the challenge of logging ALL of the pertinent connection, disconnection, and termination messages associated with the Cisco SSL AnyConnect client without overwhelming the syslog capture display with extraneous messages. This blog will briefly outline the applicable log messages and what they do, along with some screenshots displaying both the provisioning in ASDM and the behavior in the log itself.

Listed below are blocks of syslog message ID’s appropriate for AnyConnect connectivity issues for the Cisco ASA security appliance running OS8.2. Rather than give a specific for each and every log message, message ranges are listed along with a general description of what the messages are indicating. Later we will describe how we adjusted the log levels.

Once the preceding blocks of messages were identified, the log levels for these messages were changed using ASDM to Alert level as shown in the following screenshot: 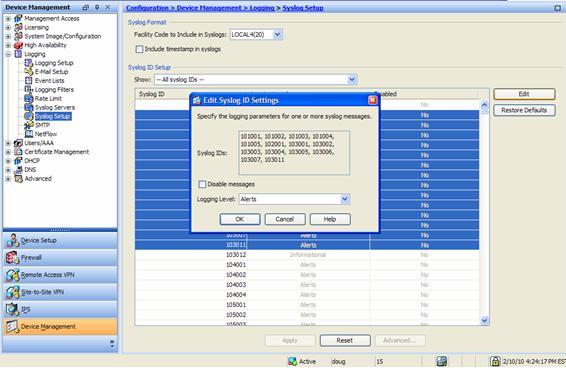 With this process repeated for each range illustrated above, the next step was to set logging to go to a specific facility (ASDM, mail, syslog server, etc.) to this same level (Alert) to minimize the messages: 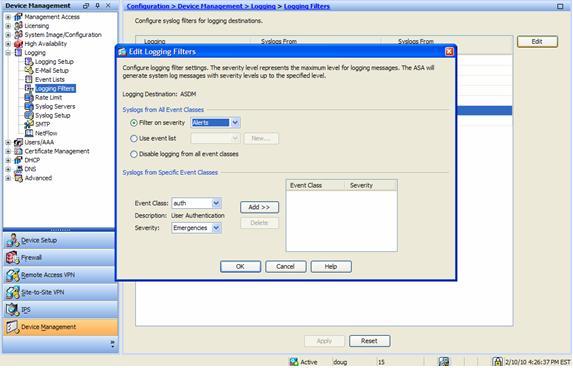 The resulting output in the ASDM logging window is shown below. Note the authentication failure on the top row of the display: 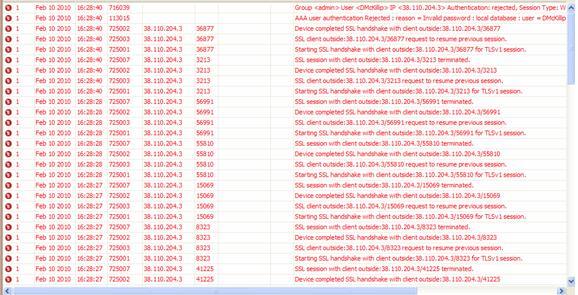 Arguably, fewer messages could have been enabled than were chosen, as some of the messages (syslog IDs 722001 – 722038) apply only to the older version of the SSL VPN client, SVC 1.x. Secondly, the WebVPN messages were added as the AnyConnect client can be launched from within the browser-initiated SSL login. Last of all, the range of syslog message identifiers is not only specific to the level of code on the ASA, but also will vary between platforms.