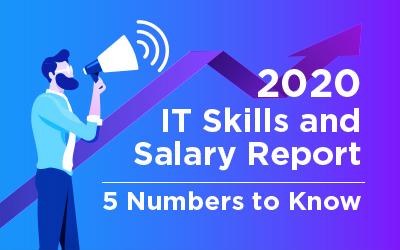 The fascinating part about publishing an annual IT Skills and Salary Report is comparing findings from previous years.

Are salaries increasing? Are budgets decreasing? Is talent recruitment still the biggest challenge for IT management?

When you survey thousands of worldwide IT professionals, you quickly find that opinions, salaries and priorities can vary significantly from year to year, or by region, tenure or job role.

Here are five data points from the 2020 IT Skills and Salary Report that illustrate important trends in professional development, skills gaps, hiring and top-paying certifications.

1. When formal training is available, 80% of IT decision-makers authorized it—an increase of 36% year over year.

This finding is a double-edged sword. First of all, it’s encouraging that more managers approved training this year. To combat rising skills gaps, many decision-makers have realized that developing the skills of current staff is more feasible than hiring new employees.

And yet, 20% of decision-makers didn’t approve training even when their organization made it available. Managers must do everything in their power to ensure employees have a means to build necessary skills. Sure, 20% is smaller than last year, but it still means one out of every five decision-makers is wasting developmental opportunities for staff.

Rising workloads have scared some managers away from prioritizing team members to set aside time for professional development. If they’re worried about a short-term dip in productivity, imagine the long-term damage that will be caused by skills gaps. According to our survey respondents, the residual harm triggered by skills gaps can include increased employee stress, higher operating costs and delays in development and deployment.

If IT decision-makers don’t approve training now, they’ll pay for it later. The IT professionals we surveyed value career growth over everything else—including salary. If employees don’t have opportunities to develop, they won’t hesitate to seek alternative employment. 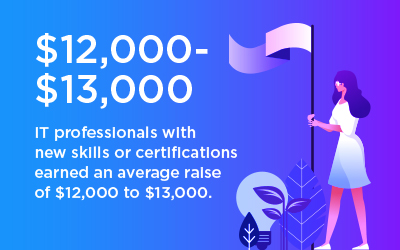 2. IT professionals who gained new skills and/or certifications last year received an average raise of $12,000-$13,000.

In 2020, the average IT raise percentage is nearly six percent. With worldwide IT salaries at $85,115, the average IT professional received a raise around $5,000. But some earned more—much more.

The reason for a raise impacts the amount of the raise. Twelve percent of individuals who received a raise attribute it to developing new skills that were of added value. Those same individuals earned nearly $12,000 more this year compared to 2019.

Employees who add value to the organization are often rewarded for their performance. That’s why adding new skills, especially in much-needed areas like cybersecurity and cloud computing, has major benefits. IT decision-makers are overwhelmed with skills gaps again this year, so any employee who is proactive in their skill development will be noticed and likely rewarded.

Training for a certification also has monetary benefits. IT professionals who attribute their raise to obtaining a new certification experienced a salary bump of nearly $13,000.

Twelve percent of IT professionals who received a raise attribute it to developing new skills that were of added value. Those same individuals earned nearly $12,000 more this year compared to 2019.

Throughout the history of our report, we’ve found that certifications frequently result in pay increases. Certified IT professionals on average earn more than non-certified peers. The biggest discrepancy is in North America, where the salaries of certified professionals are eight percent higher than those with no certifications.

If you were still wondering if training for new skills or certifications pays off … now you know. 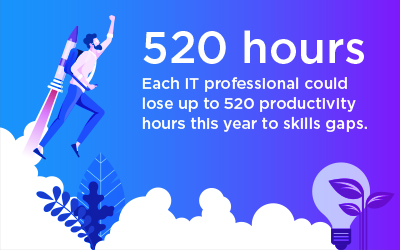 3. Each IT professional could lose up to 520 productivity hours this year to skills gaps.

The costs of skills gaps are plentiful. Increased stress. Lesser work quality. Adjusted product plans and timelines. They are the biggest disruptors in IT departments around the world.

But to put an actual number on it, 67% of IT decision-makers believe skills gaps cost their employees between three and nine hours of work per week. Twelve percent say the cost is north of 10 hours per employee, per week. If an IT professional is losing an average of 10 productivity hours a week to skills gaps, that’s equivalent to 520 hours per year.

And wasted time results in wasted money. The average North American IT salary this year is $115,906, which means skills gaps can result in nearly $29,000 wasted per employee in 2020. Add in the opportunity costs of not training employees to overcome business challenges and the losses are even more substantial.

Put these numbers in front of managers who don’t approve training for employees. It’ll cost them more not to train their staff.

67% of IT decision-makers believe skills gaps cost their employees between three and nine hours of work per week.

4. 69% of IT decision-makers have more than one open position on their team they haven’t been able to fill.

Sixty percent of IT managers say hiring has been difficult, compared to 12% who say it’s easy. With the inability to find qualified job candidates or pay what they demand, many IT positions are still open. Almost all decision-makers had at least one job they couldn’t fill over the past year, while 69% say they have multiple unfilled positions.

Almost all IT decision-makers had at least one job they couldn’t fill over the past year, while 69% say they have multiple unfilled positions.

Hiring challenges have certainly contributed to skills gap in recent years. When asked what the most important hiring qualification is, 59% of IT decision-makers said “relevant skills.” Hiring may seem like a simple solution for skills gaps, but the talent pool isn’t always deep. And certain job roles present bigger challenges than others.

5. CISSP is the top-paying IT certification in the world with an average salary of $119,170.

Around the world, CISSP has the highest average salary at $119,170 per year. Regionally, it ranks first in EMEA and Asia-Pacific, fifth in North America and sixth in the United States. CISSP ranked third worldwide in 2019.

CISSP’s associated salaries and popularity (it’s the second most-pursued certification of 2020) illustrate how cybersecurity will be a major IT investment area again this year.

Attaining this credential is proof of years of security experience. It’s not for newbies—achieving your CISSP has been likened to earning a master’s degree in IT security. It also requires you to have at least five years of full-time, relevant job experience before attempting the incredibly-demanding exam.

Want to know the other top-paying certifications around the world? Well, you’ll just have to download the report once it’s published.

Get first access to the 2020 IT Skills and Salary Report

IT Skills and Salary Report Hub